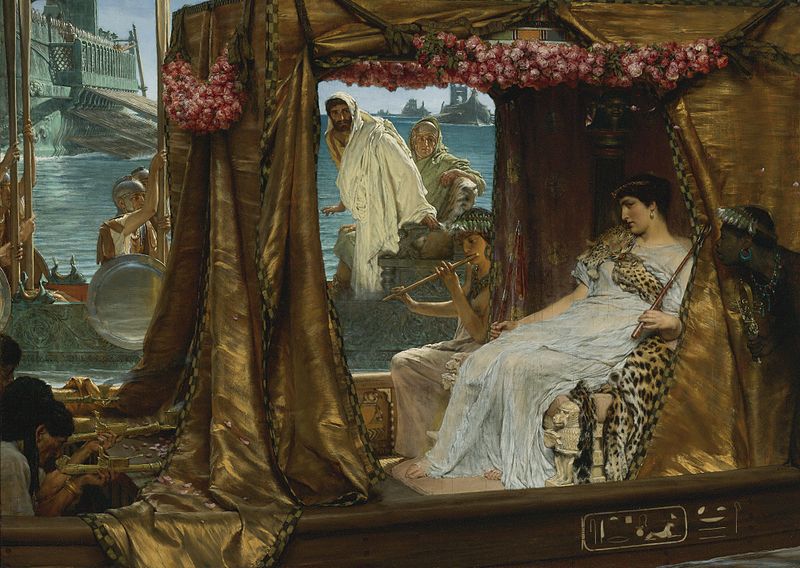 This is a guest article by one of our great speakers: Richard Alston. If you would like to hear more in his fascinating talk on Cleopatra, book with this link.

I half remember a clip from a black and white film of Antony and Cleopatra. A group of very North
European looking actors are playing some generic Romans and they are chattering about Cleopatra.
One of them, evidently playing ‘silly girl’, asks, ‘Is she black?’ The others laugh at her stupidity and a
senior man explained that she was Greek.

The question was a manifestation of the danger of Cleopatra. What difference would it make if she
were black? In the context of a film of that date (c. 1950?), I am guessing it would have made all the
difference if one of the great historical love stories was of an interracial relationship. The idea was
quickly dismissed. The great Roman general Antony (and Caesar before him) would not have fallen in
love with a Black woman. The relationship was already transgressive since Antony was married to
the ‘respectable nice’ girl Octavia. It questioned the confining of normal sexual behaviour to the
institution of marriage. But decades before the first interracial kiss on mainstream television, the
idea that the great romance of Classical antiquity was between a European man and an African
woman was truly threatening. Of course, it was unthinkable and could be laughed away.

Only Cleopatra had made people think it. That’s the thing with Cleopatra. Somehow, her (hi)story
breaks boundaries. It makes the unthinkable thinkable. It does dangerous things.

It always was a dangerous history. For the Romans, it was a foundation story. It was associated with
the civil war of 32 – 30 BC, a war decided by Antony’s defeat at Actium and concluded with the
suicides of Antony and Cleopatra in Alexandria. The ‘victory’ of Actium allowed Augustus to establish
himself as a monarch and thereby found the Roman Empire. Cleopatra and Antony represent the
road not taken and can be made to represent everything that Augustus was not: the luxury, the wild
parties, the privileges of monarchy, and the passions of sex. Augustus was associated with traditional
moral values, restraint, and empire. A vision of a strong and sexy Cleopatra broke the imperial rules.
Her appeal was in the transgression. There could be something powerful, all-consuming and real
beyond the everyday conventions, something more real.

And that appeal resonates across the ages. When Elizabeth Taylor and Richard Burton played the
roles, the glamour of Hollywood invested the otherness of Cleopatra and Antony: the vision of the
stars melded with the vision of Cleopatra in a romance which was played out in public and which
transcended the manners of the everyday lives which their audience led. Would one rather be the
respectable, safe politician or the Hollywood (and Ancient) romantics? And it was not just sex; it was
also love, passionate and consuming. The fantasy of Cleopatra was also the Hollywood romance.

But the fantastic also has its dark side. Cleopatra has been imagined as a symbol of the East, of
voluptuous languor, sexual danger and what it is to be beautiful. So often in art she has been white,
ridiculously so for a woman brought up under an African sun, very young and partially naked. Her
body has been displayed to the eyes of the beholder, and one of the most powerful women of
antiquity has been depicted as unable to deny the desiring eye that strips her of her clothing. The
famous scene in which she is smuggled in to Caesar’s camp in Alexandria carried in a carpet becomes
the very young woman given to the much older man as a gift, as the East is given to the West.

The fantasy of Cleopatra becomes a fantasy of possession and of access of men to the beautiful
female body. It risks making that dynamic normal, saying that powerful men have always used their
power to take women, that women are always the objects of male desire and women’s power lies
not in their familial and political power, but in their ability to manipulate male desire. From the
revered stories of Classical antiquity to contemporary Hollywood, this is some like to play the game
of sex and power.

Cleopatra’s story is dangerous and exotic and threatens the established order offering a glimpse of
the unthinkable alternative to everyday life. But there are those who wish to possess, own and
control that fantasy. The fantasies of Cleopatra, from antiquity to the present, remake Cleopatra.
She has become other people’s fantasies, lost in her own myth and the most powerful and famous
woman from the ancient world is reduced to powerlessness.

Book your tickets to Richard’s next talk HERE