Being an expat in London can be difficult sometimes, especially if your’e used to really filling up your free time. So last week I decided to try and enrich my social life and do some fun stuff through Funzing.com. There are hundreds of experiences on the site and I had no doubt about which one to try first… Cheese & Wine Matching.

Why is that you ask? First of all I really love cheese (I mean REALLY LOVE). Secondly, a lot of people pretend to know something about wine (admit it, you just want to seem sophisticated), so I thought it was a good chance to actually learn something new (and if I get to have cheese while doing that, I’m in!)

So, I took the DLR service towards Greenwich and joined the terrific host for the night Julia and a group of like-minded people, who felt like an evening of a whole lot of cheese and wine.

A group of over 20 strangers sat round a table with 6 glasses each. Julia (from the South London Wine School) started by introducing us to all the wine and cheese combinations, there were 6 in total. Going from white to red alongside creamy to harder cheese (apparently that’s how it’s supposed to go).

Luckily we had our handouts stating all the names of wines we’re going to have as I would have surely forgotten most of them. So if you fancy a great combination of cheese and wine to end your day here they are: 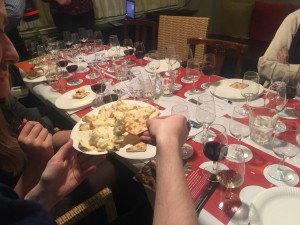 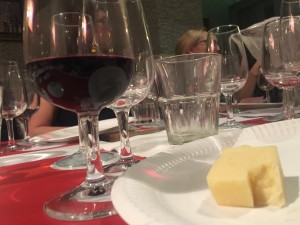 So, after an evening full of learning, booze and cholesterol I made my way back home promising myself to replicate everything I learned. I would definitely go again to this Cheese and Wine Pairing Masterclass!